This section contains bulletins and pertinent information for installers or repair facilities. Many of the bulletins in this section deal with very common installation or unit problems. Always check for pertinent bulletins before beginning any installation or if a problem occurs with a unit. Check back often. We add bulletins as information becomes available. If you have any questions please call the warranty department at 800-841-6060 or email us at warranty@dahmerpower.com.
1998-2004 Chrysler 2.7L VIN R, U & V Engines
U & V Engines

The AERA Technical Committee offers the following information regarding engine failure on 1998-2004 Chrysler 2.7L VIN R, U & V engines. There have been reports of premature engine failure on these engines. Those reports include tensioner failures, oil consumption, and engine bearing failure.

It has been suggested that many of these failures may be the result of engine oil sludge or gelling. This condition exists when the engines oil is no longer able to disperse harmful contaminates, thus reducing lubrication of the needed parts. One cause of engine failure is oil sludge accumulating in the cylinder head drain back passages preventing sufficient oil flow from the top of the engine to the oil pan. Another is a similar situation of sludge build up on the oil pump pickup screen as shown in Figure 1 below.

Depending upon the startup oil level in the oil pan and the amount of pooled oil while the engine is running, a depleted amount of supply oil may remain in the oil pan. The amount of oil in suspension in the cylinder heads may overwhelm both the valve stem seals and PCV system, causing oil consumption. This oil consumption may or may not produce oil smoke out the tail pipe as temperatures within the exhaust system (catalytic converter) completely burn the oil vapors.

Some AERA members report repeated engine oil flushes and oil changes may be a temporary resolve for effected engines that have not suffered major failure. Also, much shorter oil change intervals are necessary, perhaps as often as every 1000 miles to keep the sludge from reappearing. 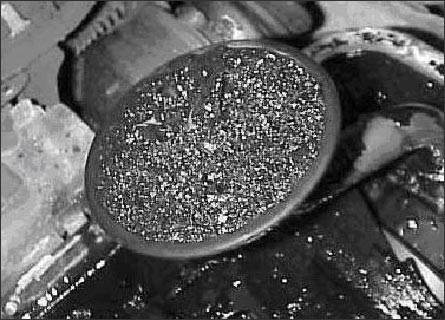